How to Overcome Anxiety, Depression and Bullying to Live your Dreams

Hi!! I don't exactly know how to start this off, but I suppose I'll start by introducing myself to whomever is reading this. I'm Ashly and I am a music photographer. I currently work for Warped Tour as the Pit Reporter, and I can quite honestly say this is an absolute dream job for me, but it wasn't exactly the easiest road getting here. When I was about 12 or 13 years old, I picked up my first camera, I was always borrowing my parents and taking photos of my pets and plants and random objects and it just sort of became a fun hobby of mine, but I'll elaborate later on how I got started in this industry and how I believe anyone can keep pushing and really accomplish something when they don't give up.

"I was always severely bullied. . .I was constantly out of school due to severe anxiety and depression"

Throughout my childhood I was always severely bullied ever since I can remember. I think the reason kids picked on me is because I was always so sensitive and quite literally the smallest out of most everyone, so I just became an easy target and people learned how to play into my vulnerabilities. When I was 10 years old, I was constantly out of school due to severe anxiety and depression, and whenever I would go to school, I would get made fun of for always being anxious to the point of crying if someone even looked at me the wrong way. The bullying continued through middle school and high school, with it only getting increasingly worse. In my junior year of high school I decided to take photography class, which I thought to be a great idea and was super excited about until a girl that had been bullying me since the age of 5 was in that same class.

"I got anonymous messages, letters, and even people coming up to me in the hallways at school telling me to kill myself and telling me how pathetic I was..."

This girl consistently made everything a competition, but always felt the need to message me or tell my friends and sometimes even tell me to my face how much better she was than me and that I would never amount to anything. I went through both my junior and senior year just sort of dealing with her shit and bearing it, I tried not to let it get to me, but she, along with others, spread nasty irrelevant rumors and essentially made my high school years a living hell. I got anonymous messages, letters, and even people coming up to me in the hallways at school telling me to kill myself and telling me how pathetic I was...there were so many times I wanted to just do it, and I honestly don't know how, but I kept pushing on. When all this was going on, I would for the most part keep to myself, eat in the bathroom at school or sit in my car during lunch. You sort of get the gist about how my school life was, so that's as much as I'll elaborate on that.

Now, life out of high school was a whole other story; this was the real world now. Going into college and going into a real career and setting myself up to be on my own was already scary enough, but these things that people said and did to me still haunted me and just stuck in my head, and still do at times. Finding myself and finding my footing into what my career is now was no where near easy, I had people now in the real world telling me I couldn't do things, that I couldn't amount to anything, and a lot of these people were men in a male dominated industry. Want to know what I did with these not so new opinions from new people? I used all of these things, all of these words and memories from my past and used them as motivation. After years of crying and beating myself up over what wasn't even true, I decided what I wanted more than anything was to prove people wrong.

"I'm Ashly and I am a music photographer."

I think that good can come out of every bad situation, but it takes time and it takes finding your strength and right mindset to do so. It took me 13 years to be able to do that, maybe even longer, but now that anyone says I can't do something or I'll never amount to something, it pushes me to just prove them wrong and do better. I know it's so much easier said than done, but pushing through and being determined to get ahead and to do what everyone said I couldn't got me noticed, it got me to where I am. If you have something that you're passionate about or are even thinking about pursuing, do it!! Just do it and do not let what ANYONE says stop you.

Ultimately you are in control of your own happiness; you have to weed out the toxicity in your life, whether it be people, words, situations etc. and don't let anything hold you back. I can tell you that there is a long road ahead, but I can tell you that it's also not impossible. I still struggle with my mental illness, constantly, and that doesn't just go away, but I use that as a push, and I hope that whoever is reading this knows that any mental illness and any situation you're in does not define you or what you're capable of.

"you CAN do this, and it DOES get better."

I'm not always the best at story telling or giving advice, but I want you to know that you're worth everything, you're so capable of more than you think, you CAN do this, and it DOES get better <3 -Ashly Anyone can reach out to me on any of my social media if they need someone. Instagram- AshlyNicolePhoto Twitter- http://twitter.com/ashnicolephoto

Shelby from Girls Behind The Rock Show talks Mental Health...Surviving and Thriving 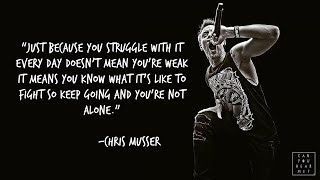 How music has helped my anxiety and depression.

How to Overcome Anxiety, Depression and Bullying to Live your Dreams